Deadline: None. Purely speculative. Not yet submitted anywhere in any form, let alone contracted.

Comments: I didn’t actually add anything new to this, as you’ll see from the entries above, but I did haul it out, look it over, put it in a modern format, etc.

I had originally intended to post the opening scene to my blog, along with the twenty-three others I’ve put there so far, but I realized that it’s out of date. I wrote that scene in… 1987, maybe? A long time ago, anyway. And some of the tech on my starship’s bridge is already becoming obsolete, so I’ll need to rewrite that scene.

For that matter, I had to do some research on just how wrong the tech was, and what would happen to more modern tech in the situation I described. So I did the research, which I think justifies a progress report even if I didn’t do any actual writing yet.

Comments: This was originally meant to be a comic book, where I would script it and Kiri would draw it. I sent Kiri the first four script pages, and then nothing happened.

So in my current obsessive digging through unfinished projects, I dug it up, and decided to see whether I could rewrite it as prose.

I now have four pages of a prose version. This covers about a page and a half of the comic book version. And I gotta say, I think it works better as comics — but I don’t have an artist. Kiri keeps quite busy with her own projects. Sigh.

I’m really not sure what I’m going to do with it. If anything.

Comments: Jeret’s on his way back to his ship, but may not get there right away.

I’m probably going to retitle this because I don’t think people immediately pick up that the original was a play on “impartial observer.” For those of you who don’t remember this story — i.e., everybody but me — it’s intended to be an old-fashioned space opera; the protagonist’s job is to explore other inhabited worlds to see whether they have any customs or inventions that might be worth copying, and in doing this he stumbles across A Threat to the Galaxy.

Comments: Okay, I’m starting to get rolling. Hyacinth has convinced Lily to stay with the body while she goes to fetch the constable. Lily is terrified she’ll be found by elves and kidnapped or killed, but has agreed to stay anyway.

Current page count: 13 (I’m not sure whether I missed a progress report or gained a page from reformatting; the previous progress report says I was on 11, but the file was on 12.)

Comments: Where I hadn’t worked on this for four and a half years I had to update a few things; I’d updated it back in ’09, but it needed more.

(For those of you who don’t remember, which is probably all of the tiny handful reading this), I originally started writing this in the late 1980s.)

Anyway, I’d hauled it out as part of my file-sorting project, so I thought I’d give it a little more attention. I’d stopped with the narrator, Will (unless I decide he’s Wayne Ellsworth), wondering if maybe he’s going nuts; in today’s installment he decides he can leave that question open for now, and gets ready to drive the Car for Al.

Current page count: 7 (However, this includes a couple of pages of front matter; formatting the page numbers to start later isn’t worth the hassle.)

Comments: I’m still irrationally hoping that a miracle will happen and the missing ten pages of Stone Unturned will mysteriously reappear, so I didn’t want to work on that, but I was in an Ethshar sort of mood, so I dug this out. I’d actually written another page that never got a progress report, I see — that was in April of 2012.

Anyway, I did have everything assembled to write this, including an opening scene, so it’s as good a project to tackle as any, right?

Having opened with Azraya making an escape, I’m now filling in some backstory.

This one got as far as being submitted to Tor in proposal form many years ago — around 2004, I think.

Comments: Frog has decided he was heading the wrong way and turned east; Lord Hopin is in Deerford; and Rhaminythaeria is following Lord Hopin but at least half a day behind.

Comments: I didn’t even remember that I’d ever started this! I remembered the outline, but nothing beyond that. But there it was, and here it is.

Erevar has found that Lord Querien has been trying out some sort of magic on Erevar’s niece Dara. Erevar has just taken the sleeping child back to her own bed.

Last time I posted about this I said, “So far, the named provinces are Kerdery, in the northwest; Aulix, in the north; Lithrayn, in the east; and Mellinise, just southwest of the Imperial capital, Orz. I think there are about sixteen provinces in all.”

The imperial capital is named Lume now. The rest is still correct. 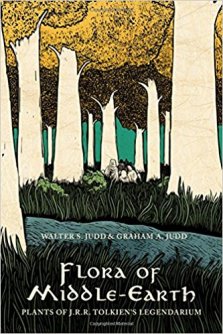 Comments: On Twitter, Kurt Busiek talked about seeing the book Flora of Middle Earth and thinking it looked like a Tolkienian cozy murder mystery. He and several of his followers expressed interest in reading such a book, so I offered to write one.

That’s now Elfshot, though the title may change. It’s not set in Middle Earth, since I can’t get the rights, so I’ve had to create my own world for it — yes, yet another. The Folk are small humanoids, about two-thirds human size, who live in a place called the Vale and have as little contact as possible with humans, elves, delvers, or the not-yet-definitely-named forest spirits who live in the surrounding areas. Hyacinth Undercliff is one of the Folk — the town librarian and historian — who lives with her ill grandfather, and she winds up trying to figure out who killed a young scavenger named Mulberry Thicket.

In this first three pages, Mulberry’s girlfriend Lily has discovered the body and led Hyacinth to it.

I had originally opened the story differently, so today’s work also involved major rewrite of the first two pages.

Comments: I’m still absorbing the plot twist in Tom Derringer and the Steam-Powered Saurians and I think I may have made a mistake in setting up part of Elfshot the way I did, so while those stew I worked on Charming Sharra a little. Poldrian is getting ready to perform the spell Sharra wants, even though he has reservations about her ability to pay for it.