Ithanalin's Restoration, formerly known as Ithanalin's Collection, is the eighth Ethshar novel. It's a story of an apprentice wizard named Kilisha whose master, Ithanalin, has a spell go wrong through the interference of a spriggan and a tax collector. She's forced to work without guidance to restore the household to its natural order.

This novel was not very closely tied to any of the previous novels, though when the series continued at least one subsequent novel followed up on some of the events in it. Few characters from other Ethshar stories appear, and none play major roles. It's set in the city of Ethshar of the Rocks at the exact same time that The Spell of the Black Dagger is taking place in Ethshar of the Sands, a fact that is important to the plot, but one need not have read The Spell of the Black Dagger to follow and appreciate the story.

If you have any suggestions for material I should add, e-mail me. 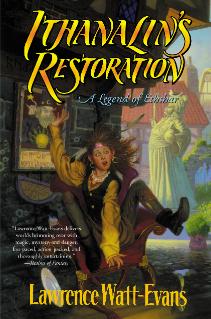 So where'd the story come from?

And the premise... I'd been rereading the Oz books by Frank L. Baum, and decided there were some ideas there I wanted to play with.

That was it, basically. No great issues I wanted to explore (though some themes did develop along the way), just things I thought would be fun.

I started writing what was then called Ithanalin's Collection many years ago -- the earliest fragment is dated 1989. I intended it to be the seventh in the series at Del Rey, but then Del Rey and I had our falling-out and the series was put on hold. I stopped work on Ithanalin's Restoration about two chapters in, and left it there for ages.

Finally, though, I was settled in at Tor Books, and they were interested in picking up the Ethshar series, but it seemed as if we ought to relaunch with something a little bigger and splashier than Ithanalin's Collection. So I wrote Night of Madness for them instead.

When that was done and published it was time to work on the next one in the series, and hey, that was Ithanalin's Restoration!

The title changed from "Collection" to "Restoration" because my editor, Jim Minz, commented that putting the word "Collection" in the title might confuse some booksellers into thinking it was a collection of short stories, rather than a novel. This had not occurred to me in over a decade of having the story planned, but once it was pointed out it was so obvious that I changed the title immediately.

(As far as name changes go, for a time Kilisha was named Amari; I changed that because there's a very minor character in Taking Flight named Amari who, I realized while preparing the Wildside edition, will be a far more important character in Azraya of Ethshar if I ever get it written. Two Amaris in major roles might get confusing.)