"Night Flight" is a short story set in the World of Ethshar, about a wizard sent to rescue a princess. It was first published in Flights of Fantasy, an anthology edited by Mercedes Lackey, published by DAW Books in December 1999, ISBN 0-88677-863-8. The Ethshar series consists so far of thirteen novels and eleven shorter works.

he soldiers were merely supposed to be accompanying him across the courtyard and into the keep, rather than guarding him, but somehow when Deru of the Nimble Fingers considered the possibility of turning around and going home, of refusing the King's invitation, he doubted they would just let him go. Since it would not be in keeping with his dignity as a wizard to be chased down and dragged into the throne room by a bunch of big stupid men in armor, he marched along between two of them, head held high, just as if he wanted to be there. 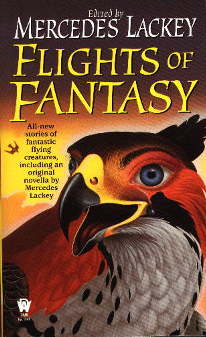 I had received an invitation to submit a story to a fantasy anthology about birds of prey that Mercedes Lackey was assembling. I immediately knew that:

So after some thought I decided I wanted to write something with an owl in it, from the point of view of the owl's prey, and that immediately suggested someone shrunk down by Riyal's Transformation (which I'd included in lists of wizards' spells for years).

And there it was.

And, I'm pleased to report, it sold to the anthology it was written for.

"Night Flight" was first published in Flights of Fantasy, an anthology edited by Mercedes Lackey, published by DAW Books in December 1999, ISBN 0-88677-863-8.

The story is reprinted in the back of the May 2001 Wildside Press edition of Taking Flight, ISBN 1-58715-288-6, with cover art by Dalmazio Frau . It was chosen to accompany that story because the two are both set in the northern part of the Small Kingdoms and have some thematic similarities.