"The Guardswoman" is an episolary tale -- it's the letters a young woman sent home to her mother after joining the City Guard in Ethshar of the Sands, telling of her difficulties in fitting in in this traditionally masculine occupation. It first appeared in Chicks in Chainmail, an anthology edited by Esther Friesner, published by Baen Books, September 1995, ISBN 0-671-87682-1. It was written specifically for the anthology.

The story is part of the Ethshar series, which consists so far of thirteen novels and eleven shorter works.

"The Guardswoman" is copyright 1995 by Lawrence Watt Evans. 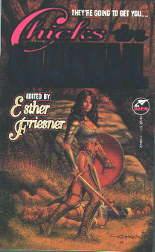 Well, I made it. I'm a soldier in the City Guard of Ethshar of the Sands, in the service of the overlord, Ederd IV.
It wasn't easy!
Getting here wasn't really any trouble. I know you were worried about bandits and... well, and other problems on the highway, but I didn't see any. The people I did see didn't bother me at all, unless you count a rude remark one caravan driver made about my size.
He apologized nicely after I stuffed him head-first into a barrel of salted fish.
After that everything went just fine, right up until I reached the city gates. I asked one of the guards about joining up, and he made a rude remark, but I couldn't stuff him into a fish barrel--for one thing, he had a sword, and I didn't, and he had friends around, and I didn't, and there weren't any barrels right nearby anyway. So I just smiled sweetly and repeated my question, and he sent me to a lieutenant in the north middle tower...

I like Esther Friesner. She's a delightful person, and one of the funniest human beings I've ever met. We collaborated on a novel, Split Heirs, a few years back.

So when Esther invited me to submit a story to what was then called Ladies Knight Out, I wanted to come up with something good.

(Incidentally, Esther's edited several other anthologies, and I have stories in some, but not all, of them.)

Sometimes when an anthology comes along I have a story planned out all ready to finish up and send in -- I have a backlog of about two hundred unwritten stories to draw on, and usually a dozen or so that are written but not sold, for one reason or another. This time, though, I didn't have a thing that really seemed to fit.

The guidelines called for funny fantasy stories about female warriors -- not really a particularly narrow category, but all the same, I couldn't think of anything I had on hand that would do.

So I started looking at it logically. Female warriors. To do it properly, then, this must be a story that could not work with a male protagonist. Okay, what are the inherent differences between males and females?

Well, some of them are pretty fu... I mean, pretty darn obvious. Women are shaped differently than your traditional male warrior, so we have the matter of finding a breastplate that fits. Women can also change shape drastically, i.e., get pregnant...

And then there's this whole boys-will-be-boys male bonding thing. There's no reason women can't be included in that, but generally they aren't.

So let's consider a story about a woman trying to fit in as the only female in the Ethshar city guard, and having to deal with male bonding rituals...

And there's the story. Esther liked it and bought it and there it is.

"The Guardswoman" first appeared in Chicks in Chainmail, an anthology edited by Esther Friesner, published by Baen Books, September 1995, ISBN 0-671-87682-1.

The story is reprinted in the back of the May 2001 Wildside Press edition of The Spell of the Black Dagger, ISBN 1-58715-360-2, with cover art by Dalmazio Frau . It was chosen to accompany that story because both stories are set in Ethshar of the Sands.

The first three Chicks in Chainmail have been collected in an omnibus, Chicks Ahoy!

. "The Guardswoman" is included, obviously, as are my non-Ethshar stories "Keeping Up Appearances" and "In for A Pound."

And it's also included in my collection, Tales of Ethshar.