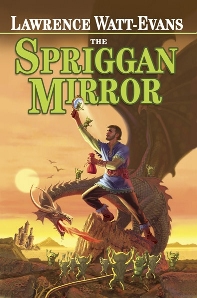 The Spriggan Mirror was the ninth Ethshar novel. It's a sequel to Ithanalin's Restoration and With A Single Spell, but should still stand on its own.

In 2005 I conducted an experiment in online serial publication with it, which was more successful than I had anticipated. It brought in much more money than I expected, though still far short of what Tor was paying me for a novel, and it was fun. I repeated the experiment with The Vondish Ambassador in the fall of 2006 and into 2007, then The Unwelcome Warlock (working title The Final Calling) in 2010 and 2011, and two more after that. Alas, the serial format seemed to wear out its welcome after that. The serialized novels all have ink-on-paper and ebook editions from Wildside Press, and the series is still continuing in more traditional, unserialized fashion.

The premise of The Spriggan Mirror is simple enough. In With A Single Spell I introduced magical little creatures called spriggans that are created by a magic mirror that's been lost somewhere in the mountains of the Small Kingdoms. As long as the mirror is out there it keeps producing more spriggans, so their numbers are steadily increasing.

Spriggans are drawn to wizardry, and have a habit of getting underfoot at inopportune moments, interrupting spells, knocking over delicate equipment, and otherwise causing trouble.

Eventually, at the urging of Ithanalin and various other people, the Wizards' Guild decides that something must be done about this nuisance. Since Tobas of Telven accidentally created the mirror and is therefore responsible, he and his wives, Karanissa and Alorria, are instructed to deal with the matter.

Tobas knows what the mirror looks like, and roughly where it was last seen -- but that doesn't mean finding it will be easy, even with magical aid, so he hires an expert, a man named Gresh who has made a career of finding things for wizards.

And nobody said that dealing with it once it's found would be easy, either.

When I began writing The Spriggan Mirror, it was under contract to Tor; it was supposed to be their third Ethshar title, after Night of Madness and Ithanalin's Restoration. However, after I'd started writing it, they changed their minds and asked if I would be willing to cancel the contract.

I wasn't thrilled about that, since I had started writing it, but I agreed.

Although Tor and I canceled the contract, I decided to try an experiment with this project, serializing it on the web. You can still read the first chapter or two online in the original format.

The experiment was a success, I wrote the whole novel, and sure enough, publishers showed up. Not the major New York houses, but publishers.

The novel appeared in the February 2006 issue of the webzine Son and Foe, and was published by Wildside Press in trade paperback as a January 2007 release. (I had previously negotiated a deal with FoxAcre Press, but the Wildside deal has supplanted that. I went with Wildside because they were able to offer more money, better promotion, and the advantage of having most of the Ethshar series in one place; FoxAcre was understanding and released me from our agreement.)

Here are a few more background facts about the novel:

And here's one final extra: Covers that never were...