"Weaving Spells" is a story in which a young woman goes looking for her missing fiance in a wizard's house. It first appeared in Sword and Sorceress 16, edited by Marion Zimmer Bradley, and published by DAW Books in June 1999, ISBN 0-886-77843-3.

The story is part of the Ethshar series, which consists so far of fourteen novels and eleven shorter works. 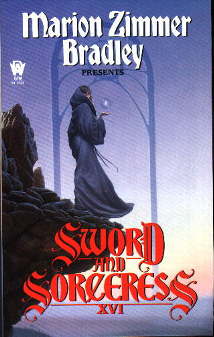 Kirinna had been staring out the farmhouse window at the steady rain for several minutes, worrying about Dogal, when she got up so suddenly that her chair fell backward and crashed on the floor. Her mother jumped at the sudden sound, dropping a stitch. The older woman looked up.
"I'm going after him," Kirinna announced.
"Oh, I don't..." her mother began, lowering her knitting.
"You are not," her father announced from the doorway; he had risen at the sound of the toppling chair and come to see what had caused the commotion.
"Father, Dogal and I are supposed to be married tomorrow!" Kirinna said, turning. "He should have been back home days ago, and he isn't! What are you going to do tomorrow, keep the whole village standing around while we wait for him?"
"If he's not here, then the wedding will be postponed," her father said. "You are not going to go running off in the rain looking for him -- what if he comes home while you're away, and you're the one who misses the wedding?"
"Is it any worse that way? It's still early. I'll be back tonight, I promise."
"That's what Dogal said," Kirinna's mother said worriedly.
"Which is why you aren't going anywhere, girl," her father said, pointing a hand at Kirinna. "Now, you pick up that chair and settle down to your work." He gestured at the bowl of peas Kirinna had been shelling before her worries got the better of her.
Kirinna stared at him for a minute, then sighed; all the fight seemed to go out of her.
"Yes, Father," she said. She stooped and reached for the chair.
Her father watched for a moment, then turned to resume his own efforts in the back room, polishing the ornamental brass for tomorrow's planned celebration.
Kirinna fiddled with the chair, brushed at her skirt, adjusted the bowl -- and then, when she was sure both her parents had settled to their work, she ran lightly across the room to the hearth, where she reached up and snatched her great-grandfather's sword down from its place on the mantle.
"What are you...?" her mother began, but before the sentence was finished Kirinna was out the door and running through the warm spring rain, the sheathed sword clutched in one hand, her house-slippers splashing noisily through the puddles as she dashed through the village toward the coast road.
A moment later her father was standing in the doorway, shouting after her, but she ignored him and ran on.

I received an invitation to submit a story to Marion Zimmer Bradley's Fantasy Worlds while in the midst of writing "Night Flight". This was an invitation-only anthology that seemed to be fairly prestigious, and I was flattered to be included, so I definitely wanted to write a story for it. That invitation was accompanied by the guidelines for Sword and Sorceress 16, probably just because they were handy and the deadlines weren't far apart -- Sword and Sorceress 16 was open to anyone who was willing to abide by the guidelines, and I already knew about it and had been vaguely thinking of sending something, but it hadn't seemed very urgent. (Later volumes in the series were not open to just anyone, but I didn't know that would happen.)

I knew I wanted to send something to Sword and Sorceress eventually; I'd been putting it off for about fifteen years. I thought I might have missed my chance, though, since the series had gotten very competitive due to its long-term success, and I hadn't thought that Ms. Bradley had any particular liking for my work -- I'd sold her magazine a couple of stories, but never noticed any particular enthusiasm there.

But now she'd actually invited me to send her stuff, so I thought it was worth a shot.

On the other hand, the series really was extremely competitive, with hundreds of stories being submitted for each volume -- the period in which she'll accept submissions got shorter every year, and was down to about three weeks -- so a sale there was by no means a sure thing. I wanted to have a back-up if the story didn't sell.

And right about then I learned that the third Chicks in Chainmail volume was in the works, with a theme of women rescuing men. I figured if I came up with a story about a sword-wielding female rescuing her betrothed from a wizard, I'd have a story I could sell to either market. And after the fun I had writing "Night Flight" I wanted to make it another Ethshar story.

So there it was, pretty much; I plotted it out in detail (with some help from my wife and kids) while driving down to Williamsburg for a long weekend/mini-vacation, and wrote it when we got back, and I'm pleased to say that Ms. Bradley bought it, and it appeared on schedule the following year.

Incidentally, the working title (which my wife Julie thought up) was "Dearth of a Salesman." If it had wound up in a Chicks in Chainmail book I'd have kept that title, but it seemed out of place in Sword and Sorceress, so... it's "Weaving Spells."

And I wrote "Ingredients" for Marion Zimmer Bradley's Fantasy Worlds, and she accepted that, too. I was insufferably pleased with myself.

The story is reprinted in the back of the February 2001 Wildside Press edition of With A Single Spell, ISBN 1-58715-285-1, with cover art by Dalmazio Frau . It was chosen to accompany that story because they both have "spell" in the title -- the last couple of matches got pretty arbitrary.