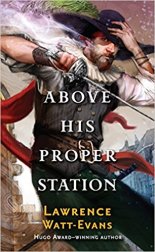 Above His Proper Station is now out in paperback, from Tor — but I haven’t actually seen a copy yet. I’m supposed to get a box of ’em, but it hasn’t yet arrived. 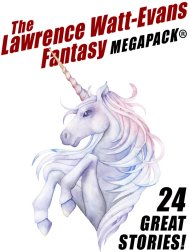 The Lawrence Watt-Evans Fantasy Megapack is scheduled for Monday, March 27.

I spent most of 2016 working on three different novels, and I’ve finished all three of them since New Year’s:

The novel I’ve always referred to by the name of the protagonist, Bravo Foxtrot, was delivered and paid for in January. I have no idea what the eventual title will be, or when (or if!) it will be published. It’s a game tie-in, so I don’t think it’ll be out until the game is, and last I heard that was still some time away.

Stone Unturned, referred to for years as “the Big Fat Ethshar novel,” is complete at 140,000 words and sold to Wildside. The contracts are signed and countersigned. The actual text hasn’t been delivered yet because Wildside was backlogged and asked me to hold off, but I’ll be sending it Monday or Tuesday.

Tom Derringer in the Tunnels of Terror, the second Tom Derringer novel, is finished at 72,000 words and has been sent to the editor, who says she should have her work on it done around the end of April. I’ll be self-publishing this one (and the entire Tom Derringer series) through Misenchanted Press.

My short story, “The Lady of Shadow Guard,” will be in the Roger Zelazny tribute anthology Shadows and Reflections, edited by Trent Zelazny & Warren Lapine; the book is tentatively scheduled for June of this year.

And “The Prisoner of Shalott” will be in By the Light of Camelot, an Arthurian anthology scheduled for August 2018.

The next Ethshar novel will probably be Charming Sharra (formerly Sharra the Petty); I’m several pages into writing it. I haven’t yet worked out the entire ending, so it’s possible it’ll bog down, or it may not reach novel length, but right now I expect it to be a short novel like The Sorcerer’s Widow. 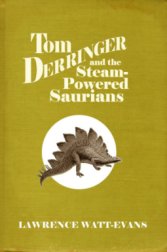 Since we’re planning to move in a couple of years, I’ve also been putting some effort into finding somewhere I could donate all my professional papers. I think I’ve found a suitable university library, but until it’s official I prefer not to be more specific than that.

And finally, my agent has a proposal of mine for a science fiction novel that we’re hoping will interest Tor.

So I’m keeping busy, and there’s definitely stuff on the way.